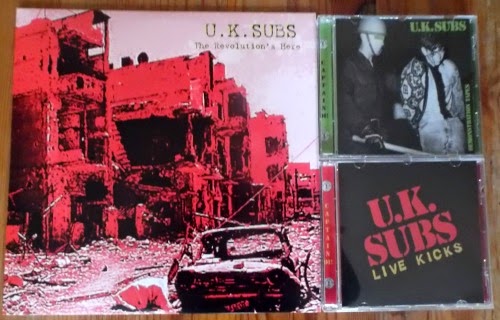 It's been a productive past few months for Captain Oi's UK Subs releases, what with Stolen Property, Charlie Harper's solo album and the second Urban Dogs album No Pedigree, now they've gone and released another couple, more on them later but first up we've got the latest little gem from Time and Matter Recordings.
The UK Subs The Revolutions Here EP, was originally released in 2000, It's centrepiece is their Reggaeified version of Thunderclap Newman’s ode to revolution; Something in The Air, which contrasts beautifully with the in yer face punk rock anthems to revolution;Reclaim The Streets and The Revolutions Here, both these and the other tracks, Go Home, Metro,Party in Paris and Works have been re-mastered for this re-release, a gloriously coloured splattered yellow and red vinyl 10”, which also features sleeve notes by Nicky Garrett and a drawing by Charlie Harper. Be quick if you want a copy cos it's a limited pressing of 500, and is sure to sell out fast! Available from Time and MatterRecordings.
Now on to the latest Captain Oi releases, which are also limited to 500 copies. The Demonstration Tapes AKA Raw Material, is a what it says on the tin, demos and raw material, some real work in progress culled from Charlie Harpers collection of Subs recordings. Top quality embryonic stuff from the first couple of classic UK Subs line ups, circa 1980-82. This re-issue includes 4 bonus demos for their Endangered Species album, which didn't appear on either of the previous releases.
Live Kicks rewinds the UK Subs clock back further to The Roxy in London on New Years Eve 1977, where Live Kicks was recorded. Originally released by Stiff Records in 1980 by mail order only, its been re- released many times over the years, but this CD is the definitive version, including the encore, and as a bonus there are 4 tracks from their 1977 demo tape.
Both The Demonstration Tapes and Live Kicks are lovingly packaged and contain extensive sleeve notes by the Time and Matter lads, and some words of introduction by Charlie Harper. Both are available from Captain Oi. Fast forward to the future and we find the Subs have started work on their Y album, and there's a new Urban Dogs single in the pipeline.